About the BPA » BPA Committees » Parks and Creeks Committee

Contact the Parks and Creeks Committee chair, Christian Kalar, email  if you would like to participate in efforts to improve our parks and creeks, and help resolve problems that arise.

Parks   Barron Park is blessed by having two beautiful parks, one on each side of the neighborhood. 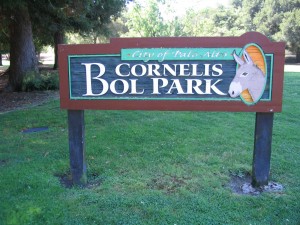 The BPA has a special connection with Bol Park. Members of the BPA Board worked with Cornelis Bol and his family and with Santa Clara County officials in the 1960’s to create a proposal to convert the Bol donkey pasture into a park. The plan required residents to tax themselves to pay for the land, which they voted to do overwhelmingly. Several talented landscape professional Barron Park residents, Ken Artunian and Jack Buktenica, stepped up to create the gorgeous landscape design of this beautiful park.They also worked to maintain a natural looking creekside, while providing erosion control.

In a second phase of development of Bol Park, the old railroad right-of-way alongside was converted into a bike path, now heavily used by commuters and students on bicycles and also by pedestrians out for a stroll.

In 2012, the City Council approved an updated Bicycle master plan for the City, which included proposals that would make some changes to the bike path. 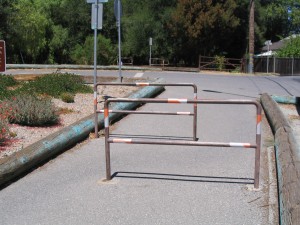 Barriers at the Matadero Ave end of the Bike Path

One proposal would eliminate the barriers at either side of the Matadero Ave at the end of the path near Laguna, allowing cyclists to pass across the road without being forced to slow down as they continue on their way, into or returning from the Research Park. Some in the community have voiced objections, noting that this would be unsafe for the bicyclists, as well as  for pedestrians having to watch for both speeding bicyclists and cars as they cross the street at the three-way intersection.

Another proposal would add lighting along the path to make it safer for those using it in the winter afternoon and early evening hours when daylight hours are short. It is unclear when either of these proposals will be implemented.

At the other end of Barron Park is Briones Park, which stretches from Maybell to Arastradero. 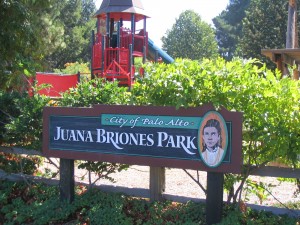 This park was formerly an apricot orchard and is now a largely open field with several marvelous play structures for children of various ages. A few years ago, in homage to its past history as an orchard, Canopy organized community volunteers to plant small mini-orchards of apricot trees at several places at the periphery. The Palo Alto Fire Department also has a station on one corner of the park.

Creeks   Barron Park also has two streams that wind their way through the neighborhood. Matadero creek passes alongside Bol Park, while Barron Creek passes through (actually under) Gunn playing fields, and then alongside Los Robles Ave. In the mid -1990’s , the Barron Park Association, led by then Board member Doug Graham, played a major role, working with the Santa Clara County Valley Water District, to create a plan to prevent future flooding from Barron Creek that had plagued some Barron Park areas for years. The project involved creating a settling basin along the bike path near Gunn High school, and  installing an 8-foot square diversion culvert under the bike path to Matadero Creek, and a 12-foot square bypass culvert from there to El Camino. The bike path was torn up for the better part of three years for this 16-million dollar project.  As a consequence of this work, and additional activity by the Water District well downstream on Matadero Creek, Barron Park neighborhoods are out of the flood zones and free of the hazards of once periodic flooding.

This year, which was particularly dry, some concerns were raised by residents about the low level of the water in Matadero Creek. The flow of water in Matadero Creek naturally falls off during the summer months as runoff from rains drops off and the natural springs dry up. In such times, the flow comes essentially from water that is continually discharged into the Creek from five groundwater treatment systems in the Research Park. These treatment systems have been operating for well over a decade, part of a State mandated remediation program to clean up the groundwater contamination that came from leaking underground tanks holding various organic chemical solvents at a dozen or so company sites in the Research Park. The Creek itself was found to be contaminated, but was cleared of the chemicals by 1997. An article on the recent amounts of water discharged from the treatment systems will be published in the fall 2012 BPA Newsletter.

There are no upcoming events.