Some very dramatic changes are being proposed by City of Palo Alto Transportation Division to the streetscape in Barron Park to improve safety and enhance the bicycling experience in our neighborhood.

The proposed Barron Park Neighborhood Bicycle Routes project will provide Bike Route signage and Share the Road (Sharrow) roadway markings. The project will tie together the Matadero-Margarita Avenue and Maybell Bicycle Boulevard projects and support both commuter bicycle and student bicycle activities within and through the Barron Park Neighborhood.

The proposals were shown to residents by the  at a Community Meeting on Oct 16th at Barron Park School. You can download the presentation here:  Barron-Park_101614 Neighborhood Bicycle Routes Community Meeting

The streets where improvement are proposed include:

On streets with bike lanes, residents will be required to park the cars off the roadway if the bike lane is on their side of the street. The City officials had not conducted a survey of  which, if any, properties might be affected.

You can see the proposed plans and provide your feedback to the Transportation Division at this link:
http://cityofpaloalto.org/gov/depts/trn/bicycling_n_walking/bikepedplan.asp

October 6: The Palo Alto City Council will review and discuss the the AECOM consultant’s Risk Assessment for Storing and Handling Hazardous Materials at Communications & Power Industries, LLC (CPI), 607‐811 Hansen Way, and supplemental materials, including an analysis of possible zoning strategies to establish adequate separation between plating shop uses and residences.

From the Staff Report: Recommended Motion

“Direct staff to prepare a draft ordinance for review by the Planning and Transportation  Commission (PTC) and consideration by the City Council in early 2015. The ordinance should  amend the list of uses in the zoning code to explicitly identify plating shops, prohibit plating  shop uses within a specific distance of residential uses and residential zoning districts, and incorporate an amortization schedule based on updated information on the value of affected  investments.”

October 2:  City staff and consultants will be available to answer questions about the Risk Assessment and the staff report at a pre‐meeting scheduled for October 2, 2014 from 5:00 to 7:00 p.m. at the Barron Park Elementary School, Multipurpose Room, 800 Barron Avenue.

END_OF_DOCUMENT_TOKEN_TO_BE_REPLACED

Below is the postcard mailer that was sent out last week to Laguna Avenue residents regarding upcoming street work.   The meeting will be held on Tuesday, September 23, 6:30pm at Barron Park Elementary School to discuss proposed street resurfacing work on Laguna Avenue from Matadero Avenue to Los Robles Avenue. 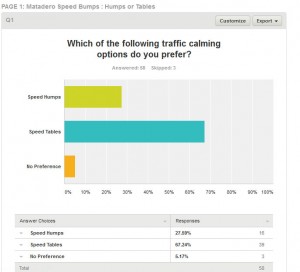 Many of you have already written to the City of Palo Alto concerning your views of the Speed Bumps on Matadero.  That apparently has not been enough to change the City Staff’s decision as to what to do. THEY NEED TO HEAR FROM YOU AGAIN. And copy Hillary on the email hillary.gitelman@cityofpaloalto.org

Here is the email (8/12/14) I received today  from Hillary Gittlemen, Planning Director, which is similar to ones she has sent to others who had contacted her previously.

” Many thanks to you and to everyone who has written in and provided comments regarding the recently constructed Speed Humps on Matadero Avenue.  Many of the comments we received said the new humps feel very abrupt and expressed a preference  for Speed Tables, like those on Maybell Avenue.

As I think you know, we asked a surveyor to measure the Humps and Tables, to see how they compared to each other and to the City’s standards.  Low and behold, the Matadero Speed Humps are above the standard of 3.5” that we use, as shown below, and we are working to get the contractor back in town as soon as possible to address this issue.
We can ask the contractor to replace the current Speed Humps with either Speed Tables or with Speed Humps that meet the City’s standard and would welcome continued input on these two alternatives by email to transportation@cityofpaloalto.org.  We would also be happy to come out and walk the street with a group of neighbors, if that’s desirable.
Whichever alternative we use for the five existing locations, we still plan to install the Speed Table at Tippawingo that will double as a raised crosswalk for pedestrians.  This speed table will be constructed at a height of 3.25” and a width of 16-FT due to geometric constraints.
Please feel free to email your additional thoughts/concerns to the email box above.  We anticipate being ready to remove and reconstruct as early as the first week of September and hopefully sooner.
Many thanks,
Hillary & Jaime”
Older Entries  Newer Entries