Approximately 25-30 people attended this meeting. At the beginning and again at the end, people had a chance to pore over sets of plans showing concepts for the Maybell-Donald-Georgia Bicycle boulevard.

You can view the detailed presentation drawings here: Maybell drawings 01.30.14 They consist of five sheets:

#2 and #3 are  two alternatives along Maybell from Thain Way to Donald Drive. Of the several concepts for Maybell,  the most significant one was to create a 12-foot wide “shared-use path” (bikes and peds) on the north side. How it would be delineated (pavers or paint) has not developed. Parking would be prohibited on the south side. Other concepts include painting “sharrows” on the roadway (indicating the roadway is to be shared by bikes and cars).

#4 is the Clemo to Amaranta section on Maybell (three alternatives) and Coulombe intersection (two alternatives). One concept is a raised textured or painted area within the intersections of Maybell-Amaranta and Maybell-Clemo, or both, or just raised sidewalks, to slow traffic and alert drivers that this is a special area for pedestrians.

#5 is along Donald and Georgia to the Gunn HS Spur Trail. One concept was to create bow-outs where the present bike/ped path from Gunn meets Georgia and to realign the path (slowing bicyclists down a little) to improve safety for students entering Georgia at that point.  It would also highlight this bike access point to drivers.

These drawings were all meant to be preliminary ideas, responding to comments from the first meeting, for which staff was seeking feedback.  Most of the “group” part of the meeting was Q and A.

The timeline for this project going forward is as follows:

The Transportation Division has just started collecting additional traffic data along the Matadero, Margarita Bicyle Boulvard route. This is in response to comments from the Planning and Transportation Commission when Jaime Rodriguez, the Chief Transportation Official,  presented the proposal in mid-November. Several commissioners expressed concerns about the safety of bicyclists who would use the route and others raised questions about the lack of data about the number of bicyclists who now use the route and the projected future volumes.

The data will include both bicycle and vehicle data. The bicycle counts will be collected using video cameras for 7-days with someone subsequently reviewing the video in an office.  Roadway tube counters at the same time will collect vehicle counts/speed data. The following image shows the locations where the data will be acquired. 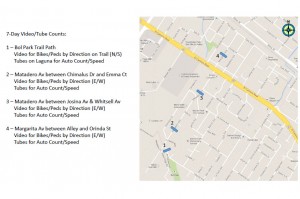 The proposal for the bicycle boulevard  followed two Barron Park community meetings, in May and September of 2013. Photos of the design concept were previously posted on the Barron Park Association website, /2013/08/25/initial-concept-plan-for-matadero-margarita-bike-boulevard/

No bicycle lanes were contemplated and none were included because Matadero itself is too narrow to accommodate them.

According to the Transportation Division, it is unlikely that the proposal will come back to the PTC before early February.  If the project does moves forward, the speed humps/tables on Matadero could be installed in late-summer. 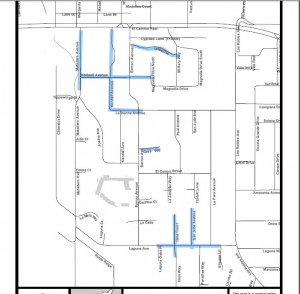 Another Community meeting called by the Transportation Division to receive input about a bicycle boulevard, this one running along Maybell-Donald-Georgia, from El Camino Way to Arastradero.

The text of the message sent to homeowners by mail:

“The City is soliciting public input on design elements of the proposed Maybell-Donald-Georgia Bicycle Boulevard between El Camino Way and Arastradero Road. This project is proposed in the City’s Bicycle and Pedestrian Transportation Plan 2012 and supports Safe Routes to School operations for Briones Elementary, Terman Middle and Gunn High School.

The kickoff meeting will include a presentation on standard bicycle boulevard treatments and allow residents to provide input, using high resolution maps, of areas where focused improvements may be necessary to improve bicycle and pedestrian operations.

All information shared at the meeting will be posted on the City website at www.cityofpaloalto.org/transportationprojects

Following the meeting, the design team will put together improvement concepts that are responsive to the community input and return for a followup meeting later in the fall.”

If this follows the recipe for similar meetings they’ve held on the Matadero-Margarita Bicycle Boulevard, Jaime Rodriguez will give a presentation about bicycle boulevard treatments and answer a few questions and take a few comments. He will then ask the attendees to break up into several groups and look at some high resolution posters of the streets taped to tables in the rear, and write their comments and suggestions for special treatments (crosswalks, signs, speed humps…) on those places on the posters.

He refused to discuss other traffic issues publicly (invited speaker to talk with him privately) when they were raised at the recent Matadero -Margarita Bicycle Boulevard meeting.

The  City’s Transportation Division has prepared a draft Initial Concept Plan for the Matadero-Margarita Bicycle Boulevard.

A community meeting has been scheduled to solicit public input on the design elements of this plan:

General Bike Boulevard Treatments
Alert road users to the presence of cyclists with:

Some of the specifics, images and treatments:

The City of Palo Alto held the kick-off meeting for the Matadero-Margarita Bicycle Boulevard Project on Wednesday, May 15, 2013. A presentation on general bicycle boulevard features was shared, and members of the public were asked to provide input on the existing conditions for pedestrians and bicyclists in the corridor. Public input was captured on aerial maps of the corridor and by staff recording public comments during the meeting.